We really like New Zealand – it’s a bit like Australia was 25 years ago, in a nice way! Perhaps it’s because we’re coming from Big Smoke Sydney, but ‘Inzud’ seems less developed, a slower pace.

The Kiwis we’ve met have been, for the most part, friendly and unfailingly helpful and hospitable.

The people who’ve worked on our boat (and there have been plenty) have been practical and proud of their work, and don’t seem to be driven by the dime, or by keeping up with the Joneses so much as Sydney-siders seem to be these days. Everyone’s living for the weekend, talking about goin’ fushin’ or diving for crays and scallies. (Damian reckons the fush must hate weekends, since every Kiwi that can get on or near the water is trying to kill them).

But the weather … It’s killing us.

When we arrived in May, it was getting chilly, but it got colder, to the point that camping in the ‘trailer park’ really lost its shine. It was getting down to 5C in our cabin at night, and the decks would be covered in ice in the mornings. Then it got worse.

Since we’ve been at Marsden Cove, we’ve had barely any decent weather (the day of our sail trial being a notable exception). The wind seems to funnel in from the ocean here and day after day it has been freezing cold, blowing dogs of chains and sending the rain in sideways. Many days we haven’t left the boat as it’s been just too hideous. 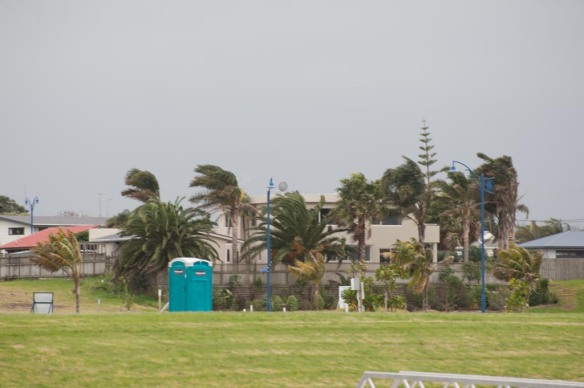 Talk about cabin fever – it’s a wonder we haven’t killed each other.

On one notable day, we sat, feeling the boat shaking and shuddering, watching trees bent double and our navigation instruments going nuts as the wind gusted stronger and stronger: we recorded over 57 knots. That’s 106kmh – just under a full hurricane.

No problem, though. We got comfy, opened a bottle (OK, two) of red and watched five back-to-back episodes of Dexter. (Sadly, we can’t watch regular telly – when our old telly died with the power surge, we raced out to buy a new one so we could watch the Olympics. But it turns out we’re in a black hole for reception, so we saw London through a snowstorm…).

More frustrating is that it has meant we haven’t been able to take the boat out, comfortably or safely, so we haven’t sailed it once since the sail trials a month ago.

Our lack of sailing experience on the boat; the narrowing window of time before the onset of cyclone season in the tropics; our on-going delays (we’re still waiting on the new nav gear to arrive and be installed); together with my Mum’s deteriorating health (we need to be able to get home in a hurry, if necessary) have combined to effectively put the kibosh on our plans to sail north to the islands this year.

So disappointing, but hey, it’s the No Plan Plan, so we’ll just roll with it.

The locals tell us the weather’s not likely to improve until at least November. We calculated we’d run out of Dexter, Boston Legal and Twin Peaks by then, so figured we’d better get the hell out before things got ugly…

So, Samoa, here we come!