We are off the dock at last!

The Wednesday morning before Easter, we finally motored out of Marsden Cove on a picture perfect morning, intending to anchor in the next bay, but turned right and decided, ‘what the hell, let’s go to Great Barrier Island instead’.

The No Plan Plan was underway!

There was no wind, so couldn’t sail, but it was glorious sunshine and flat seas – even got the ‘kini out and pretended it was the tropics!

GB is about 50 nautical miles east of Marsden Cove and a fave hangout for the NZ yachtie set, local fishermen, the odd hippy and – in the holidays – the JAFA brigade (Just Another F**king Aucklander – fortunately few of them over Easter). It’s really beautiful, with lots of little broken-off islands (some actually called the Broken Islands); safe anchorages protected in any weather, forest-covered hills, great fishing and great walking. Like the more famous Bay of Islands but less people and smaller.

We met up with our friends on Kalida, Derek and Allison, who have spent a lot of time there over the last few years and know all the best walks etc. We’ve done some beautiful hikes, to high vantage points with views over the bays and wider ocean and the weather has, for the most part, been lovely (though I haven’t been brave enough to dive in – it’s not freeeezing, but I’m sure it would shatter my illusion of us being in the tropics).

It’s been a fantastic exercise in getting to know the boat – some forward steps (we have our anchoring routine down pat, pretty much) and a few backwards (since our generator is still in bits, we’re reliant on a combination of solar power and the main engines, and we’re having some problems with the alternator/regulator… can’t quite figure out what the issue is, but it’s causing much frowning and chin scratching by D).

The learning curve has been particularly steep for poor Damian – since we didn’t have any hand over when we bought the boat, added to the fact that all the instruction manuals on board were in French, the boat computer’s operating system was in Spanish and the on-board systems are very complex, he’s been doing an awful lot of reading, studying on-line forums and downloading manuals.

Last week he graduated as marine electronics expert, having finally got our navigation instruments to talk to each other (when the local marine sparky had given up trying). This week he’s studying to be an auto electrician, trying to work out why the main engine alternators are doing inexplicable things regarding charging the house batteries.

But despite the challenges, it does feel pretty damn good to finally be on our boat and out of the marina. The first evening we sat in the cockpit in a gorgeous anchorage, with the sun going down, G+T in hand, not a breath of wind, water mirror calm, and we had to pinch ourselves – FINALLY we’re doing what we set out to do a year ago!

And then next morning we went fishing at dawn (gotta love late daylight saving – it didn’t get light until 7.30, so you can sleep in and still go fishing at dawn). Just went out in the dinghy into the pass between the broken-off islands, where as soon as you drop a line, you get a bite. We pulled in about a dozen snapper in an hour, but only kept three ‘pannies’ as the locals call them (ie pan-size) – minimum size is 27cm, measured from the deepest part of the V of its tail to its nose, which is bigger than the Oz limit, I think. Nevertheless it was dinner – and they were delicious. We’ve been fishing a few times since, with similar results: the fish are verging on suicidal.

Sunday looked a good day for a sail back to the mainland, so we set off early, heading out through the narrow pass on glassy water, with tendrils of cloud laced around the surrounding hills. And so our inaugural solo sail was a cracker – moderate winds, next-to-no swell and beautiful sunshine all the way home – couldn’t have asked for better. We anchored for the night in the bay we were intending to stop at the day we left Marsden and I cooked dinner of mussels that had been discreetly liberated from the anchor chains of the mussel leases on Great Barrier. 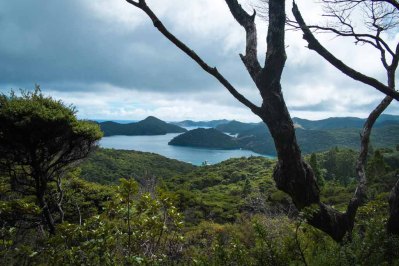 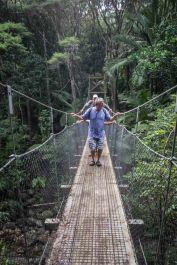 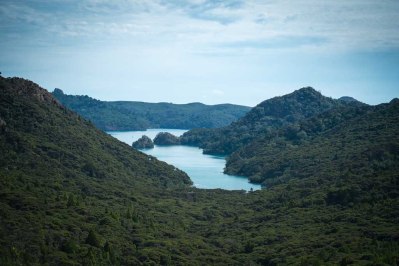 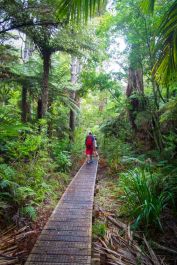 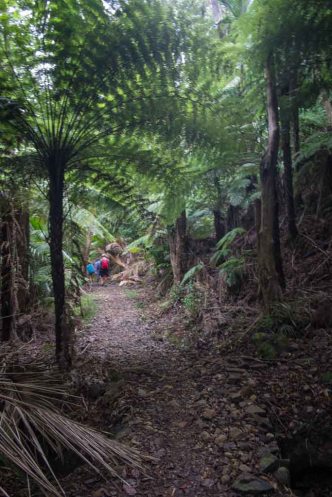 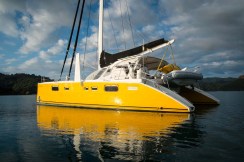 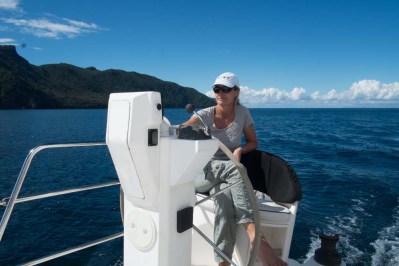 Since then we’ve been back in the marina – we had to go back to get our generator fixed. We arrived back very early Monday morning (Damian very proud of his docking effort!). Mechanic showed up to finalise the generator fix and…. nuthin. Doesn’t work. There’s still no light at the end of that tunnel. We actually got a second opinion today, but no-one has a clue what the problem is – defying all logic and sense. So we’re a bit stuck.