At the time of the dismasting, we released both the cap shrouds and the starboard lower shroud (D1) to free the broken mast and get it overboard. But the port lower shroud was nowhere to be seen: all that was left was two neat holes, the size of the chain plate bolts, in the cabin top gel coat.

So we had a pretty good idea of WHAT caused the dismasting, but not the WHY…

The Loss Adjustor quickly established that the lower shroud giving way was the cause of the mast coming down: once the mast was unsupported in the middle section, it bent like a noodle and snapped.

With a fair bit of effort, we extracted the U-bolts (the ‘chain plates’ which attached the lower shrouds to the cabin top) from both sides and it became clear that both sides of the port U-bolt had sheared off at the point where the thread of the bolt meets the smooth metal of the ‘U’. That point was exactly half way – 25 mm – through the 50mm thick deck. It made no sense at all. 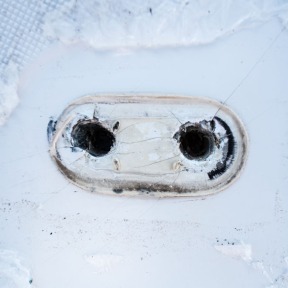 The smoking gun: the holes in the deck where the U-bolt pulled out 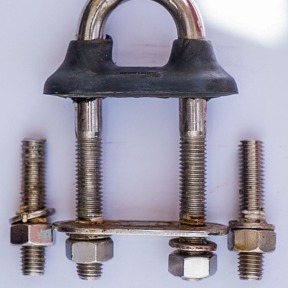 The Loss Adjustor said he’d never seen anything like it in 40 years, and ordered tests be done by a metallurgist.

The metallurgist’s report stated that it appeared the bolt sheared as a result of ‘minute cyclic movement’: there was just the tiniest bit of movement under load and, over the 10-year life of the boat, this had weakened the bolt until it snapped.

So one small fitting – probably worth about $40 – one giant headache.

Since the amount of the repair bill is going to have a lot of zeroes in it, we were a tad concerned about the response from the insurers, to say the least.
Thanks goodness for Mike, our very-experienced Loss Adjustor who went in to bat for us.

After an anxious wait, we heard from the insurers, who agreed to honour the claim.