We haven’t had phone or internet since the 23rd – it’s only just come back on this morning, which is a bonus, since British Telecom was saying they hoped to have it restored by January 2….

True to our usual form, Christmas in West Sussex has been quite the adventure. 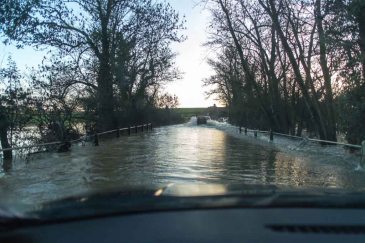 We went out to do a bit of last minute Christmas shopping on the 23rd. In addition to dealing with the usual crowds and queues, we battled hurricane strength winds (70mph) and freezing sideways rain. I was nearly blown down some stairs and the wind ripped the fake fur off the hood of my borrowed anorak! We drove home through wild wind, falling branches and flooded roads, with the headlights on high beam – and it was only 4.00pm.

I will never complain about Christmas shopping in Sydney ever again!

The storm got worse and we woke on the 24th to fallen trees and fences, floods and a power outage, which also took out the phone and internet. Damian tried to drive Grant, his nephew, to the train station – a five-minute drive away – and an hour and a half later, he hadn’t returned (and of course had no way to phone us to tell us what had happened). To cut a long story short, they never made it to the train station – they couldn’t get through the floodwaters – and had to take a long, long way around, ending up at Damian’s Dad’s place – which was lucky, since that was where we were due for Christmas Eve lunch.

Only trouble was, Davina (his sister) and I were still at her place….

We did eventually make it, and had a lovely day – despite having no electricity, which meant no heating, brrrrrr – with Damian’s Dad, step-mum, brother, sister-in-law, Davina and nephews ranging from 24 to 2 years old. We went over to his Mum’s in the evening, which is just down the road from where we are staying at Davina’s place. Had a couple of drinks by candle light there, and walked home through dark streets, flooded roads and freezing cold….Everyone saying they’ve never seen floodwaters like these around here.

Christmas Day we went to Damian’s Mum and step-father’s place for hot Xmas lunch with Davina, Karl (Damian’s brother), and Davina’s two boys. Fortunately, the power (though not the phone/internet) had come back on at around 10.30pm on Christmas Eve, so we were able to cook Christmas lunch! As expected, the table was groaning under the load of food: turkey (cooked by moi), gammon, smoked salmon, a dozen different veg followed by mountains of desserts and Christmas pud. Weather was too horrid to venture outside (no snow, unfortunately, just slush left over from the big storm). So there was nothing for it really: we just had to drink more wine and Davina and I re-discovered our mutual long-forgotten penchant for Amaretto. Mmmmm.

All in all, there were no eyes lost and everyone kept themselves nice (including me, can you believe?), so as far as family Christmases go, we’re chalking it up as a win!

Boxing Day saw brilliant sunshine and not a breath of wind: hard to believe the contrast. We went for a (muddy) walk through the village and surrounding fields and everything was shining in the sunshine – really beautiful. The river is still in flood – Davina says she’s never seen it anything like this in her lifetime. But it was great to get outside and bend our legs rather than just our elbows! 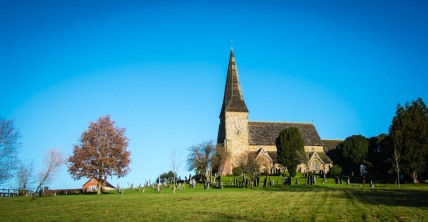 The Church in Wisborough Green

Damian with his sister, Davina and nephew, Grant 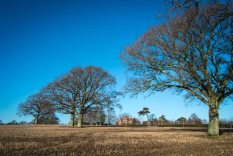 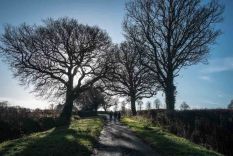 It’s now the morning of the 27th and we’ve woken up to phone and internet working – yay! So will send this now as there are more high winds forecast for today…

PS. Click on Images in the Menu bar at the top of the page to see our full England photo album.