Since we’ve been back we have been flat chat on re-building the boat. While we were away, Sel Citron went into the shed at the boatyard in Whangarei and had her topsides repainted. Oddly, people ask me what colour we chose this time around.  YELLOW of course!  It’s grown on us and now we can’t imagine anything else!  So now we’re even brighter than before.

Unfortunately, that was about all that got done while we were away and now it’s a fight and a race to get all the other repairs done, mast built and sails made etc, and get back in the water in time to sail away before winter sets in. (There is NO WAY I am spending another winter in NZ – just for the record!). We are really up against it, with a huge workload and it just seems to be one step forward, one back.

One of the biggest jobs at the moment involves repairing the decks, which were badly dinged and damaged in the dismasting. The original plan was to cut out the damaged parts and replace them with moulds taken from other sections of gel coat on the boat. To cut a long and very painful story short, that ended up not being possible. We looked at every alternative, but we’ve now resigned ourselves to having to sand all the (acres) of decks back to smooth and then paint them with a non-skid paint. It’s a huge job – weeks worth of work. 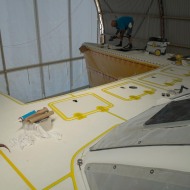 The foredeck, taped and ready for sanding and painting 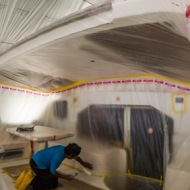 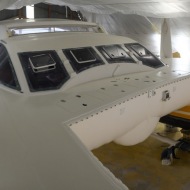 To give you an idea of the ‘one step forward, two back’ kind of progress we’ve been making, here’s a précis of a typical couple of days.…

(If it’s less painful to stick pins in your eyes than read this, skip to the *** below).

In preparing for the deck repairs, Damian spent the best part of a week trying to take off all the deck fittings – blocks, tracks, staunchions, pad-eyes, cleats, etc etc – you never realise how many they are until you start taking them off. And of course, none of them want to come off and when they do, they reveal further ‘issues’ underneath…Let’s just not even go there!

We also have to replace the solar panels, since – of course – they don’t make the old ones any more. We actually only ‘need’ to replace two of the eight, but you can’t mix different types, so we have to replace all of them. And the new ones are different sizes, which means the custom-built aluminium brackets that hold them in place on the bimini roof and cabin top have to be re-built, which means the holes in the deck where they were bolted, and the bigger holes where the old electric cables exited, have to be filled, fibreglassed, painted….

Damian spent about a day trying to get the ‘ceiling’ panels off the underside of the bimini in order to access the electrical cables for the solar panels, but couldn’t budge them (someone’s used the wrong glue to stick them on with). So the alternative was to drill yet more holes in the top of the bimini (near the ones that have to be filled from the old solar panels). He started on that, but his favourite electric drill caught fire….Eventually, he cut the holes, only to find he still couldn’t access all the cables, so he had to spend another 2 days getting the ceiling panels off, after all…

Meanwhile, the solar panels have to come in from Australia (of course!) and I spent the best part of a day trying to organise to have them airfreighted – not difficult, you’d think… but you’d be wrong!

And that’s just the tip of the iceberg…

Here she is, Glad-wrapped, mast-less, missing trampoline and in the shed…

On the up-side, we finally had our meeting with the mast builder last week. The designer FINALLY delivered the technical drawings – only 9 weeks late – so Bart the builder can now finally get started on building the mast (it was supposed to be done by now). He reckons he’ll go flat out from here, but I reckon it will be 4-6 weeks away, which is starting to cut it fine to get in the water and get away.

We can now also finally push ‘go’ on ordering sails – and hope that there aren’t any delays there!

It took two attempts to fit the new forebeam (the old one was bent and twisted in the dismasting). Here’s the second attempt, with Damian (who isn’t a fan of heights) on the forklift. OH&S would probably have had something to say about the methodology, but it got done at least! 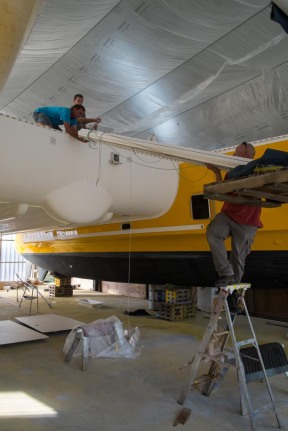 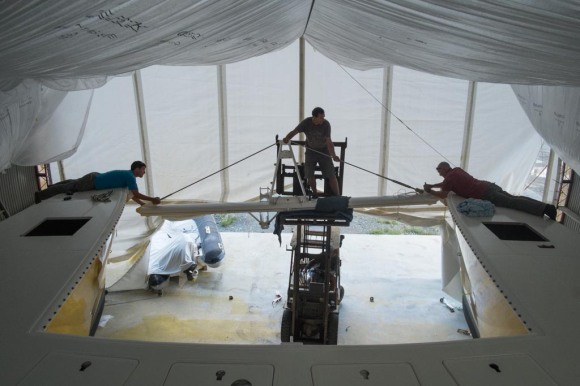 So it’s been a bit grim, but at least we’re not living on the boat while it’s in a snow storm of sanding dust!  I found a little ‘bach’ – a kiwi beach house – in Urquharts Bay, across the river from Whangarei, It’s very simple – as a bach should be – and very cute and right on the water: as I sit here looking through the French doors, I can’t see the water’s edge as it’s so close it’s below the edge of the verandah. Check it out:

The Bach at Urquharts Bay

View from our verandah

walking trail at the end of the road

The view over Urquharts from the end of the road 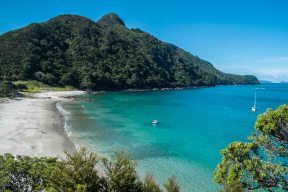 Smugglers Cove – at the end of the road 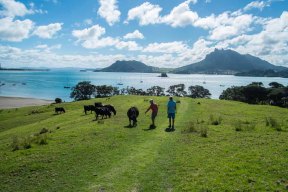 Sunset from our verandah

And if there was any doubt as to why we wouldn’t want to be living on the boat, here’s one more reason: this is the state of the saloon…

It was Damian’s birthday the Sunday before last and we had a few friends over for dinner – beef wellington and orange poppyseed birthday cake with candied orange peel, a la Kerry – and had a fun night. Luckily, Cyclone Lusi had blown through the day before, rather than on his birthday – winds of 67 knots at Marsden Cove (our usual hang) and all the catamarans in the boat yard had to be tied down to enormous concrete blocks, one at each corner. But not us, since we’re ‘indoors’ .

So there’s an upside to being in the shed!