At last! It’s been six loooooong months, but on Friday we finally had splashdown. Yes, it was Friday (sailors’ lore: never leave port on a Friday) AND it was the 13th, so considering our luck, we were probably pushing it, but it was also a full moon – and the last time June 13 fell on both a Friday and a full moon was 1909 or something, and the next one is 2049, so an auspicious day after all.

Do I sound a tad desperate???

We have had so many hurdles, high jumps and other obstacles to negotiate, we were beginning to think we’d never float again. Anyway, everything went smoothly and we’re now anchored in Urquharts Bay – just near the bach we rented. That seems like a lifetime ago!

Sel Citron is looking like new, with new paintwork all over (topsides, decks and anti foul); new mast, standing and running rigging; new window screens, signage, solar panels (we can now run a small town with our solar bank); new forebeam, trampolines and lifelines… We’ve done a huge amount of work on the outside of the boat, which is matched on the inside: Damian has spent weeks (literally) running new cabling for new navigation instruments, engine controls and lighting. We have new electric toilets (as opposed to the pump variety we had before); new ceiling panels and – best of all – new upholstery in the saloon! I can finally throw out the horrid covers that were on the couch when we bought the boat.

In keeping with the subtle exterior, the new couch is burnt orange. I have just finished sewing all the new scatter cushions, so it’s all looking very groovy. 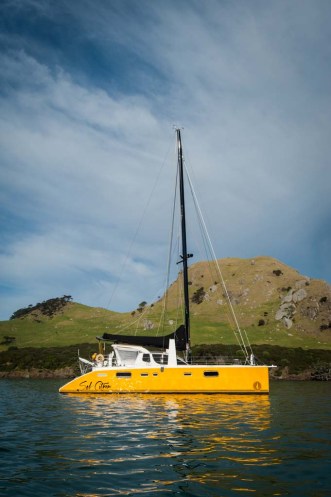 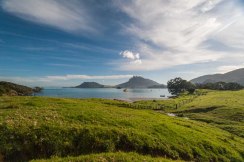 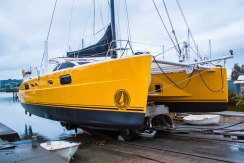 It’s been an incredibly frustrating time, with many, many long hours (we haven’t had a day off since Damian’s birthday back in March) and too many setbacks to count, but hopefully we’re now nearly there. We are still waiting on sails, which are ready, but the sailmakers won’t release them until they’re paid for (strangely enough) and we are waiting on the $$$ from the insurance company.

We’re now at the argy-bargey stage with the insurers – there’s already been some back and forth and now Mike, our loss adjuster whose recommendation is what is supposed to guide the insurers’ decision (they are UK-based), has gone on holidays for a month so can’t answer any of the insurance company’s questions…

Ice on the deck in May! Time we were gone…

We are hoping that it all gets resolved this week, and we get our sails. The plan from here is to do some sea trials and – assuming everything works – head to Fiji as soon as we can. Like I said in an earlier email, I’m not doing another Kiwi winter – and it’s already mid-June!

So please keep all fingers and toes crossed for us and hopefully we’ll be tropics-bound very soon!