By: Kerry
We made it. Arrived in Savusavu, on the south coast of Fiji’s second-largest Island, Vanua Levu, at 2.15pm on Monday, seven days and two hours after leaving Marsden Cove.

Naturally – for us – it wasn’t the boring passage predicted…

Instead, Bruce Buckley, our weather guru, (who is also the official weather man for the Australian Olympic sailing team), has offered us a job in Rio as wind finders. He reckons we can find and hang on to wind better than anyone he knows. We send him twice-daily position reports and he tells us what to expect, weather-wise. Throughout the voyage, we managed to consistently find 40 knots where there was supposed to be 10.

We had an easy enough start, but quickly found ourselves in our very own ‘squash zone’ between a low and a high pressure system. We had 40 knots plus (75kph) for two days straight, with the top gust reaching 58.1 knots. 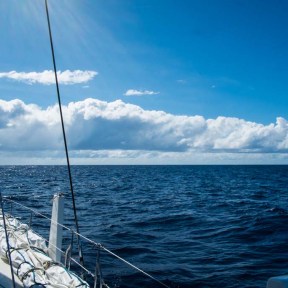 These clouds looked like they’d been drawn with a ruler. Underneath them, there were 40k gusts 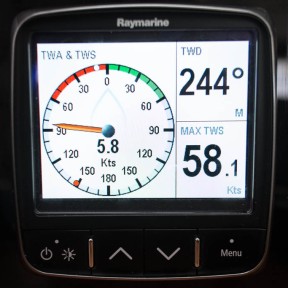 The wind finally dropped and we were able to put up our new gennaker – basically a really big headsail, a cross between a genoa and a spinnaker, to be used in lighter winds. It didn’t stay up for long….

I was on watch and Damian was asleep when I saw the gennaker furling drum, still attached to the bottom of the sail, go flying past the saloon window.

This is not a good thing: it is supposed to stay firmly tethered to the bow. I yelled for Damian to wake up, ran out on deck and managed to crash tackle the furling drum (with full, 125 square-metre billowing sail attached) as it wrapped itself around the cap shroud for the second time. By then D was on deck and we managed to lower the halyard and wrangle the sail to the deck.

But in the process of this, the aft-led sheet managed to hook itself over the helm station and under the windlass rocker switch, setting off the windlass. We didn’t immediately realise why the anchor chain was paying out, and buggered a winch handle trying to stop it before D dived for the breaker – by which time we had 40 metres of anchor chain dragging below the boat (luckily we’d lashed the anchor, so just chain).

Turns out the shackle that attached the furling drum to the prod (bowsprit) gave way – it’s a massive shackle and it’s bent sideways and the pin eye is stretched – ie massive load (see photos, attached). We think it was because it was the wrong shackle for the job (supplied by the rigger). We think it slipped and became point-loaded and eventually gave way. The sail had only been up for about 8 hours at that stage. The furling drum itself is bent, and there’s also some cosmetic damage. Hopefully no damage to the sail – we didn’t see any as we were trying to flake/roll all 125 square, heavy, spectra metres of it – still with luff cable in sleeve – and lash it to the rail…

To cap it off, we then noticed that the first reef leech line had chafed completely through the cover of the rope – again in only about 12 hours. This is clearly due to a design fault with the new mast base – we’ve had on-going issues and various modifications so far.

So much for installing the bullet proof rig to restore our confidence in off-shore sailing! As you can imagine, neither of us slept much that night as the wind peaked at 48 knots and we anxiously worried what was giong to break next!

So there we were, 650nm from Savusavu with no number one reef and no gennaker,  hoping to outrun the worst of the monster low that was making it’s way across the SW Pacific. 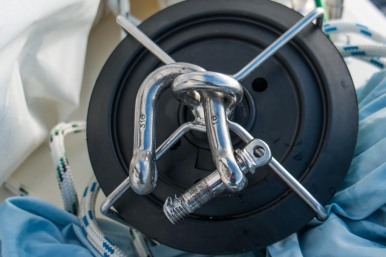 Bent shackle on the furling drum

The failed gennaker shackle – not a small item…

See the stretched eye of the shackle 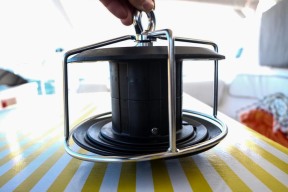 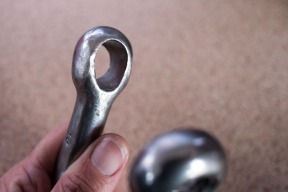 Distorted eye of the shackle
I did have a chuckle though: As I dived for the furler, D appeared on deck wearing nothing but the t-shirt he’d been sleeping in. I yelled to him to get a towel – meaning a rag towel to wrap around the drum to stop it banging into gel coat and new decks etc while we wrangled the rest of the sail. D disappeared for a  minute and reappeared wearing jeans: he hadn’t been able to find a towel, he said. I explained what I’d meant – – he thought I’d been concerned for the well-being of his family jewels and  he was a bit peeved that I’d been more concerned about deck than dick!

We’d hoped for an incident-free trip, but didn’t really manage even an incident-free day! The wind picked up again and it was hard sailing most of the way – only one day of light winds in the whole trip. We had a few other things go bang or bent – not surprising given the conditions – but nothing major and no injuries.

We did manage to outrun the worst of the massive low pressure system that swept across the Tasman with gale force winds – though we did still get the edge of it on the last couple of days.

Suffice to say, we were VERY glad to get here!

We haven’t done much yet – still feeling pretty weary – but from what we’ve seen so far, Savusavu is a quirky little town. Really just a main street along the waterfront, which is the mouth of a creek. There are probably 25-30 yachts crowded in here, as it’s the preferred point of entry for anyone coming in from Tonga and the west, or from NZ. Our new yellow is standing out like the proverbial – the Fijians love it and all we have spoken to have exclaimed how we’re brightening up the anchorage. Nice to be able to provide a community service!

Sel Citron brightening up the anchorage

We haven’t really firmed up plans at this point, but will probably head out to the east first of all. It’s been raining since we got here, so we’re looking forward to some sunshine! At least it’s WARM rain!

Sorry if this sounds a bit monotonous or confusing – my brain is still fried!

For the sailing tragics, I’ve outlined the trip in a bit more detail, below.

Day 1: SE 20-25K, broad reaching with main and genoa in reasonable seas. Noice.
Day 2: SE 25-35 gusting 50 in squalls. Top TWS: 52k. Broad reaching 2 reefs in both main and genoa, running off when necessary. 199.38nm for the first 24 hours
Day 3: Hit 58.1k TWS overnight. 25-35k SSE throughout the day, gusting 45. Mostly averaging 8.5 knots boat speed, but having to slow down now and then when it got too scary. Still broad reaching, trying to head further north. 199nm for second 24 hours. Apparently, all around us the winds are far less – we have found our very own convergence zone. Decks still dry at this stage.
Day 4: Gybed at 0130 as wind went due S and dropped to 13-18k. Put up gennaker, but not for long… After cleaning up the mess, continued with genoa and full main. Wind SW built to 20-25, gusting 35k. Bruce Buckley offered us a job as wind finders with the Australian Olympic team: “…you can pick up stronger winds than anyone else I know!”. 186nm for 24 hours (including an hour or two of going nowhere while we got the gennaker furler and sail under control).
Day 5: Luckily, we put a second reef in before dark last night. Wind built to 30-35, with periods 40-45. By mid-morning, it was down to 10-12k WSW, then dropped altogether. Motor-sailed through the day, trying to get as far north as quickly as possible, and a bit west of rhumb line ahead of NW winds. 170.3nm for 24hrs.
Day 6: Motor-sailed through the night, with wind turning N and 20-25k on the nose by midnight – slowed to about 6 knots. By midday, close reaching on port tack with 25-30k, gusting 40k. Three reefs in main, two in genoa. Seas rising. Winds 30-35 by evening. Decks a bit damp now… 165nm for 24 hrs.
Day 7: Overnight 25-35k, with apparent getting up near 50K at times. Sick of it, so furled genoa and turned on starboard engine – slow, but much better on the nerves at this point! Approx 160nm for 24 hours.
Day 8: Put the pedal to the metal to get in to Savusavu in time to clear Customs. Motored at 7.5k (2500rpm). 172nm for 24 hours. Arrived Savusavu 14:15hrs – 7 days, 2 hours. 1252.31 nautical miles at average 7.32 knots.