We arrived in Fulaga on Sunday, but that being church day, we were invited to postpone our sevusevu until Monday morning. Maunie and Exit Strategy (both friends of ours) were the only boats in the anchorage when we arrived, but throughout the day, six other boats, who’d also taken advantage of the weather window, arrived.

Come Monday morning, we all dinghied to the beach landing, changed into our skirts (sulus for the men) and walked the 15 minutes across the island into the village of Muanaicake (pronounced Monna-tha-kee), the largest of the three villages on Fulaga.

Chief Taniel, the eighty-something –year-old head of Muanaicake, was sitting cross-legged on a woven pandanus mat on the floor of his corrugated iron house, his shock of steel-wool hair standing on end, dressed in a luridly coloured fleece jumper, cotton sulu and woolly socks (it was a drizzly day, and this is, officially, winter in Fiji).

The sevusevu ceremony was conducted entirely in Fijian, punctuated with resonant hand-claps (known as cobos) and lots of vinakas (thank yous). It was all very serious as we presented our twisted, newspaper-wrapped bunches of kava and Chief Taniel officially welcomed us to the village. Very serious, right up to the point where the Chief cracked a funny in Fijian and he and the other seated elders all dissolved into fits of giggles…

Laughter is the soundtrack of village life in Fulaga: kids playing invented games; groups of women crying with laughter over something silly and men taking the piss out of each other: everyone seems to see the humour in life. This warmth and friendliness carries over to their tradition of hospitality which is, simply, overwhelming.

It’s this warmth and hospitality that has put Fulaga on the chart as something of a destinational Holy Grail for cruising yachties. Remote and difficult to reach, it’s a rare opportunity to be immersed – and welcomed – into ‘traditional’ Fijian village life.

Fulaga (pronounced Foo-lung-a), in the southern Lau Group, is one of the most remote islands in Fiji, some 200 nautical miles (370 km) directly into the trade winds east of Suva, the capital and closest city. It’s a tiny speck of a raised limestone atoll, around half way between Fiji and Tonga, with a handful of similar specks as its only terrestrial company.

There is no air strip, no mobile phone reception, no internet, no mains water or electricity – most houses have a single solar panel for lights, and water is collected in tanks or from the village well – and there is only one, communal phone in the village which occasionally rings and whoever happens to be closest, answers it.

The islanders still live a basic ‘village’ lifestyle: there isn’t much of a cash economy, with almost all their food harvested either from the land or the sea. The soil is poor, so vegetables are limited to a couple of starchy root crops and their leaves; pumpkins, pawpaws and some small bananas.

There is a supply ship that is supposed to come once a month, but it tends to be a bit sporadic and the supplies undependable. It brings basic staples for the tiny village shop, kava and fuel and takes away wood carvings (the island’s main source of income) and passengers bound for the mainland: it’s the only option for the locals to travel to and from the big island. 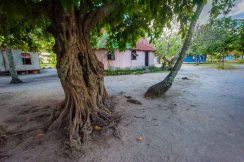 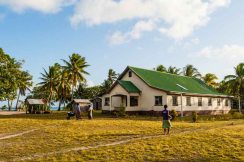 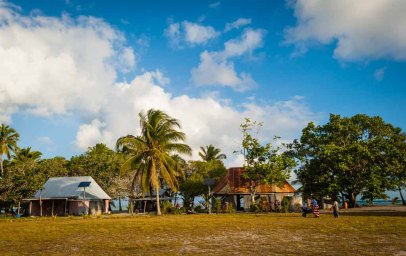 The Lau Group has only been officially open to cruisers – or tourists of any kind – since 2011, so it’s all very new to the locals. Fortunately, the Fulagans recognise that the appeal of the place is in its simplicity and authenticity, so they are not looking to build tourism infrastructure or change things too much. While some of the villagers, particularly the older generations, have only a Grade 8 education, many of them have worked in tourism elsewhere in Fiji and several have university degrees – and all have returned home because they prefer the simple life of the village.

At this stage, at least, their focus is on utilising the revenue that the yachties bring in to fund village infrastructure projects. On arrival, they ask for a $50 per boat ‘donation’ that is to help fund things like solar panels and flushing toilets for each house in the village.

In return, their unique tourism strategy is to allot a host family from the village for each visiting yacht. Around 60 yachts in total visited in 2014, and participating families (not all the village is involved) are allocated on strict rotation. The host family looks after the yachties while they’re in the village, inviting them to meals, church, food gathering, fishing, kava sessions and any other activities going on: essentially acting as the conduit to immersion in village life.

It’s up to the individual yachties to decide the level of involvement they want, and how they want to reciprocate: most will bring offerings of food or useful household items, invite the families out to the yacht for a meal or a fishing trip. It’s a wonderful way to get to know one another and most cruisers end up staying a whole lot longer than they’d originally intended.

With seven yachts arriving on the one day, family hosting resources were stretched to the max. We were last on the list and there was no-one left present to host us.

Lisana, Chief Taniel’s daughter – who was home on vacation from the US, where she drives long-haul semi-trailers for a living – took Damian and me around the village, looking for our host. We ambled along the well-worn path, past neat, oval-shaped, pitched-roof houses fashioned from corrugated iron, painted in peeling shades of pink, blue and green; past the volleyball nets and the primary school, where kids in blue and white uniforms played improvised ball games in the sun-cracked dirt-and-grass playground.

Lisana would call out to someone lazing in the shade of a breadfruit tree, or silhouetted in the window of a cool, dark house. I chatted to her about life in the US and the contrast with village life in Fulaga. I asked her if there were any female chiefs.

“How’s that going for you?” I asked, acknowledging the all-male circle of elders in the chief’s entourage, and that next-in-line to Chief Taniel was his brother.

“Not very well,” she said, with a wry smile.

We circled back to the chief’s house, where the men of the village had already pounded up the cruisers’ kava and were wringing a wet sack of it into a huge tanoa. It turns out, the Chief has to ration the kava as the men tend to binge drink: the substantial supply from seven boats was gone within a couple of days, and villagers were asking us if we could spare more ahead of the supply ship’s arrival.

After much discussion, one of the village elders, Seta, volunteered to host us. He and his wife Penina are quite elderly and don’t speak much English, unlike the younger generation, who speak it perfectly.

Our fellow cruisers had already been led off by their hosts to welcome lunches in their homes. Poor Penina was a bit embarrassed by our unexpected arrival (as were we), but nevertheless produced platters of boiled cassava and a noodle soup/casserole (Maggi 2-Minute noodles feature heavily in local cuisine), and neighbours brought over extra morsels to supplement it. 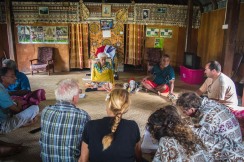 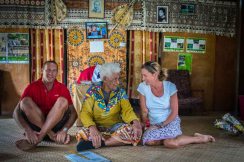 Chattin’ with the Chief 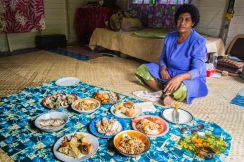 We sat on the floor and ate, while Seta and Penina watched: they would eat once we’d finished. It’s the usual custom in Fiji for guests to eat first, but we always find it rather awkward, as we’re never sure whether all the food before us is to be eaten by us, or whether we’re depriving our hosts if we leave nothing for them. As it was, there was plenty.

Afterwards, we excused ourselves and headed back to the boat, to the rhythmic thump thump of kava being ground.