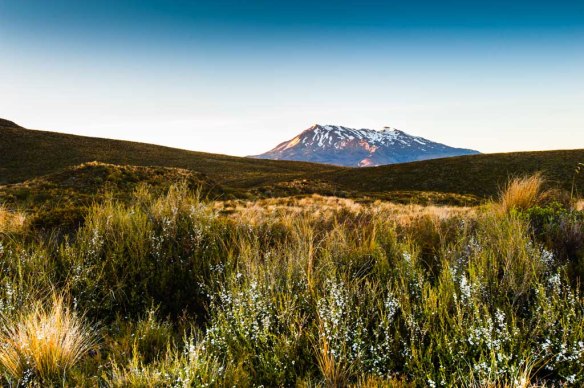 Hiking (or ‘tramping’) in New Zealand is primarily associated with the famous trails of the South Island. But right in the centre of the North Island, three hours drive south of Auckland, is a region of active volcanoes that provides the dramatic setting for New Zealand’s best one-day hike: the Tongariro Alpine Crossing.

The rocky and often steep track traverses active volcanic craters, rises to nearly 2000 metres and skirts surreally-hued crater lakes that shimmer with steam – and freeze over in winter.  The alpine weather can change in minutes from brilliant sunshine to icy sleet and there are no supplies available en route. It can be completed in a day, but Lonely Planet describes it as ‘exhausting’.

We drove down from Auckland and met up with the Kiapas and Maunies in the little village of National Park, where we’d booked a cottage for three nights to give us some flexibility with the weather: you really don’t want to tackle Tongariro in crappy weather.

The Tongariro National Park encompasses three active volcanoes that lie along the string of volcanoes ridging the North Island’s Central Plateau. The highest is Mt Ruapehu, at 2797 metres. On our first morning, Ruapehu was invisible in thick cloud: with a better forecast for the following day, we went mountain biking rather than hike the Crossing in freezing fog.

There’s no cost to do the walk – the trail, boardwalks, signage and amenities are immaculately maintained by the Department of Conservation – which in part explains why up to 1000 people hike the trail each day.

We were keen to get a jump on the crowds – most of whom are reliant on a public transfer from town. The guy from the bike shop gave us the tip: be on the trail by dawn. The only way to do that is with your own vehicle. So we’d parked one car at the end of the trail the previous night, and drove to the start of the trail in pre-dawn chill. It worked though: we were the first out of the blocks.

The track starts at 1100 metres above sea level and soon starts winding upwards, following the Mangatepopo Valley. We were in deep, cold shade, trekking in beanies, gloves and thermals – but it wasn’t long before we were peeling off the layers.

Despite the dire danger warnings posted everywhere from the park signboards to the Lonely Planet guide book urging trampers to check they are properly prepared for this challenging walk (make sure you have enough water, stout walking boots, thermals, wet weather gear and adequate fitness), we were soon being overtaken by a motley collection of backpackers doing the walk seemingly woefully under-prepared.

Lucky for everyone, the weather was perfect: with glorious sunshine and no wind, as the day wore on, the exposure threat was more from heat stroke than hypothermia.

From the top of the first climb, there are endless views to the south, including of volcanic Mt Taranaki. It’s then a flat, exposed stretch through the broad glacial basin known as the South Crater. The only obvious sign of life is the sparse clumps of tussock grasses scrabbling a living between monster blocks of rock that erupted – possibly recently – from the volcanoes flanking the valley. 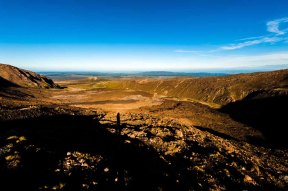 The very recent and reasonably violent volcanic activity in the Park adds a unique frisson to the walk. Mt Ruapehu erupted in 1995, 1996 and again in 2007. Tongariro erupted as recently as 2012, vaulting 20,000 volcanic ‘bombs’ into the sky, one of which – a large boulder – smashed through the roof of the Ketetahi hut, used by hikers as an overnight stop on the trail. Signs and signal lights all along the trail warn that the entire area remains “in a heightened state of unrest and eruptions can occur at any time”.

A rude wake up call: volcanic bomb through the roof

We walked past Mt Ngauruhoe, which featured as Mt Doom in the Lord of the Rings movies. It didn’t exist at all until about 7000 years ago and last erupted in 1975. We opted out of the optional side trip to climb its scree-covered slopes to the summit at 2287m…

From the South Crater, the track winds upwards, skirting Mt Tongariro (another potential side trip, to the summit at 1967m) to the high point of the Crossing at Red Crater, at 1886 metres.

As I panted up the final approach, a skinny German backpacker in baggy t-shirt, shorts and Converse sneakers came towards me, walking in the opposite direction against the flow of trekkers, playing a ukulele and singing, sotto voce, the Johnny Cash anthem, “Burning Ring of Fire”.

The Red Crater is around 10,000 years old with a hollow lava tube (aka a dike) in its middle that has a remarkably ‘labial’ look about it (thanks, Lionel, for pointing that out – once you see it, you can’t forget it).

Irene and Lionel on top

The views to the other side take in the absurdly lurid Emerald Lakes – explosion craters that have filled with mineral-laden water – set like cabochons of turquoise in the red-brown landscape, and volcanic vents and fumeroles sending up plumes of steam. From the saddle, the trail descends steeply down a slippery scree slope that has just about everyone landing on their bum at some point, to the shores of the Emerald lakes.

We stopped for lunch in the lee of a huge boulder on the edge of an elyptical lake that looked like it had been painted in the pure hues of the printer’s palette: cyan water, magenta grasses around the edges, and sulphurous yellow and black rocks looming over it and mirrored in its surface. 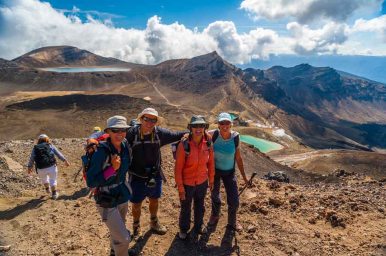 Even though the sun was shining, the altitude made it too cold to stop for long and we headed off towards the Blue Crater. Looking back along the track from the rim gives a wide-angle view of the broad black lava floes, red oxide-stained volcanic cones and the barren, chocolate-coloured scree slopes we’d negotiated throughout the morning.

Note the black lava flow across the valley floor 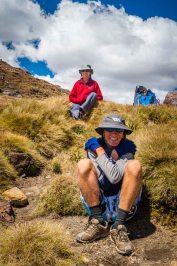 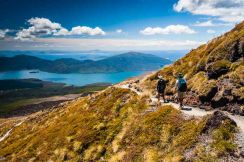 Just beyond the crater lake, we had our first views to the north, all the way to Lake Taupo, before the track began to zig zag down in an extraordinary series of broad switchbacks that make things very easy on the knees – it became suddenly evident why it’s recommended to walk in the direction we’d taken. It would be punishingly demoralising to start the walk in the other direction and spend hours walking up the hill.

We wound our way down through scrub and bushland and native forest and emerged at the car park.

They say the trail takes six to eight hours. We did it in nine and a half, but we took it easy, and had lots of snack and photo stops. Rather pleasingly, we pulled up pretty well – not even a blister or a sore muscle!

Irene resorts to her Chinese work boots for the downhill walk

The end of the trail

Mt Ruapehu from the car 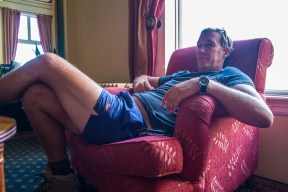 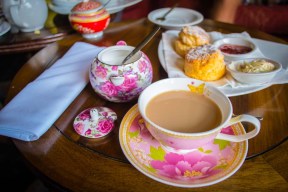 Nevertheless, we felt very relieved (and ever so slightly smug, as we passed pooped trekkers waiting for their transfers) that we could pile into the crew car and head off (still in our hiking gear) for high tea at the Whakapapa Chateau.