Sailing into the dawn

At last! An ‘easy’ passage from New Zealand! We left Auckland as planned on Friday 8th – the rain stopped chucking it down about an hour before we cast off – and headed north. Starting from Auckland rather than Marsden Cove added 60-odd miles to the trip, making it a 1260 nautical mile voyage, following the rhumb line – which we just about did.

We saw no more than 20 knots of breeze the whole way, and barely a white cap or any kind of swell. A lot of the time we were motoring as there wasn’t enough wind (MUCH the preferred option to too much!) but we did have some lovely sailing here and there (including finally flying our spinnaker for the first time ever), and some really charmed conditions.

One day, it was so calm we stopped the boat and Verdo and I jumped in for a swim, mid-ocean – felt fabulous! Only one fish en route – but we might have done better if we’d had the lines out more often…

The first ‘easy’ passage we’ve had

Got the kite up for a minute – never seen it up before! 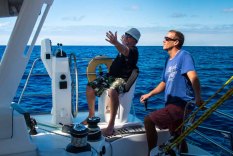 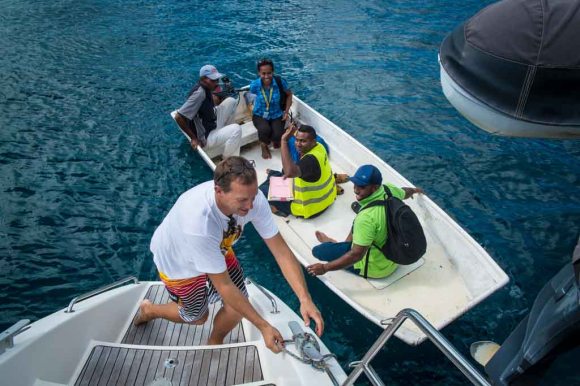 One night was particularly stunning – not a breath of wind and a zillion stars reflected in the inky surface of the sea. As the boat cut through the water it sent out ripples of phosphorescence and we left a glowing wake behind us. Every now and then some mysterious sea creature would flee from us, trailing a rapid silver zig zag. Then a red half moon rose like a chalice out of the sea, casting red slivers of reflection across the water all the way to the boat: the proverbial stairway to heaven!

Of course, it wouldn’t be a Lemon crossing without an ‘incident’! On Sunday morning (two days out) we were motoring with no sails up and I noticed a chafe mark on the main halyard. To cut a long story short, Verdo went up the mast and confirmed that the halyard had chafed most of the way through, where it runs across the new mast track stopper block installed by Bart the mast builder after our trip back from Fiji last year, when we sheered it off the mast.

Those of you familiar with the mast saga will understand our despair… Just as we thought we were finally finished, we are back to the same situation we were in when we arrived here last year.

Only this time, we can’t use the mainsail at all….

On the upside, we were doing 10 and 11 knots with just our gennaker up on the way here – so who needs a mainsail anyway?

We arrived in the early hours of Saturday morning, having slowed the boat down the night before so as to arrive in daylight. It’s nice to be back.