Twenty-three years ago, I sailed into the Lau Group on another boat, when this remote Fiji island group was officially ‘off-limits’ to cruisers. We were the first foreign yachties to visit in years (we had special permission) and my favourite memory is of having a bunch of the local kids on board for a ‘cool’ drink.

Most of them had never seen a white face before and none of them had experienced anything colder than ‘tropical’. I watched one little guy sneak the ice out of his glass and hide it in his hot little hand to keep for later…

These days, the village of Daliconi on Vanua Balavu Island (Northern Lau), has at least one foot in the twenty-first century: there is internet (in places) and a small airport. But still no refrigeration.

We were welcomed by the Chief during a sevusevu ceremony and then, having been formally accepted as part of the family, we wandered around the village: neatly trimmed lawn, not a scrap of rubbish and quite substantial homes by Fijian village standards.

We arrived with three other boats, including Robbie and Bev on Mersoleil. It was Robbie’s 70th birthday and the villagers, with typically wonderful Fijian hospitality, put on a party: a pig was killed, a feast prepared, the birthday boy was dressed in traditional garb and there was music and dancing and speechifying. Oh, and of course a whole lot of kava drinking… 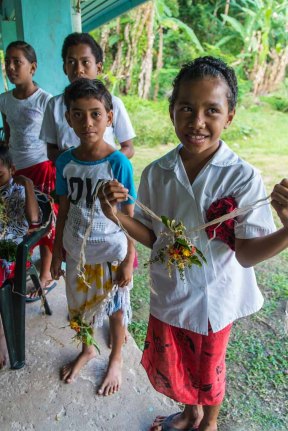 Part of the spread…

After a squally night that saw us on a lee shore, we upped anchor and moved around to the Bay Of Islands and tucked in under a rocky cliff. The wind was still blowing strongly and several other boats were anchored with their teeth into it, but we found ourselves in a back eddy – totally calm, stern to the cliff, facing 180 degrees to everyone else. Perfect.

The Bay of Islands is an Alice in Wonderland seascape. A maze of mushroom islands grows out of milky turquoise water that seems to glow with the sun reflecting through it from the sandy bottom. Each island balances precariously on a narrow pedestal and is tufted with a messy hairdo of stunted palms and extraordinarily tenacious figs, their roots clawing onto every bump and crevice to hold them fast.

It’s easy enough to get lost kayaking among the islands, as they morph and change so unexpectedly: each islet has been pummelled by the sea into an improbable shape – tall and skinny or wafer thin, some so thin the rock looks like burnt caramel brittle, ready to snap off. From one angle, an island might look squat and substantial, but from another side it appears so frail it’s hard to imagine how it’s still standing.

Out of the wind and out of sight of any boats, it’s calm and silent – at least until we ventured into a narrow cleft and came upon a colony of screeching fruit bats: the trees looked like they were squirming.

To the northeast of the Bay of Islands, we motored into a very narrow, sheltered fjord: Nabavatu Harbour, the site of a copra plantation owned by Tony Phelp, the owner of the Copra Shed Marina in Savusavu. And we had an introduction.

In a big tin shed reminiscent of an Australian shearing shed, we met the plantation foreman, Biu and his family, making virgin coconut oil to be shipped to Suva. Biu – who’d had a stroke – was sitting on a low stool beside his wife, scraping the coconut meat from the shell with a metal hand tool. The grated coconut (copra) was then spread on a long steel-top table with a fire underneath. A young man raked it back and forth to dry it out for 10 minutes before it was squeezed into a narrow cylindrical press. The press looked like a converted car jack and the operator added his body weight to the pressure by standing in a stirrup borrowed from a horse saddle. Once pressed, the oil is left in the sun to clarify.

The copra press, with stirrup

From the shed, we followed a beautiful trail through farmland and palm groves to a lookout that afforded a view over the whole Bay of Islands. From altitude, the Technicolor water looked like it had a bunch of woolly green pebbles tossed across it: the scene looked like a scale model rather than a real landscape. 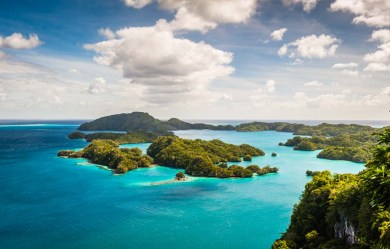 We moved further along the NE coast to Little Bay – a bay so little we couldn’t see the entrance until we were right outside it. The channel is only about 25 metres wide at high tide and looks a lot narrower at low tide: we sucked our breath in as we went through. We dropped anchor just inside, in the very middle of a tiny lagoon – there was just enough swing room for us and no-one else.

Swinging in idle circles, we were almost completely surrounded by cliffs covered in deep green jungle with coconut palms poking through matted creepers, and huge hardwoods forming the canopy. On both sides, there was a sliver of golden beach and a huge mushroom-shaped island stood sentinel to the pass. The only sounds were the bats and barking pigeons that sound like monkeys: very Jurassic Park.

We paddled the kayaks through a cleft in the rocks that led to a narrow waterway opening into a bigger lagoon.

At night, the stars were amazing with no light pollution for many miles.