When Penina was eight months pregnant with her first child (thirty-some years ago), she was aboard the inter-island trader, the Makogai, when it foundered on the outer reef of Fulaga in the middle of the night. Two lives were lost but Penina managed to get ashore and led a small group of survivors through the bush to the village, where the alarm was raised and the rescue effort was launched.

Since then, she’s had a mortal fear of the sea. While we were in Fulaga, she and Seta were getting ready to go to a Methodist Church conference in Suva, but Penina, understandably, was dreading the voyage on the supply ship.

When it finally arrived – well behind its monthly schedule – we understood why.

The villagers had been busy since daybreak, shucking mussels on the beach and filling buckets with them, preparing food for those taking passage to the mainland (there isn’t much, if anything, available on board, apparently). Everyone was excited, not least because numerous staples, including sugar, flour, and kava, had run out on the island.

Mid-morning, the Liahona, a listing rust bucket with a high poop deck a bit like a Chinese junk, lurched into the lagoon and dropped anchor off the beach. It listed perilously to one side, submerging its Plimsol line, as the foredeck crane heaved cargo into the flock of pangas (local fibreglass longboats) that gathered alongside. 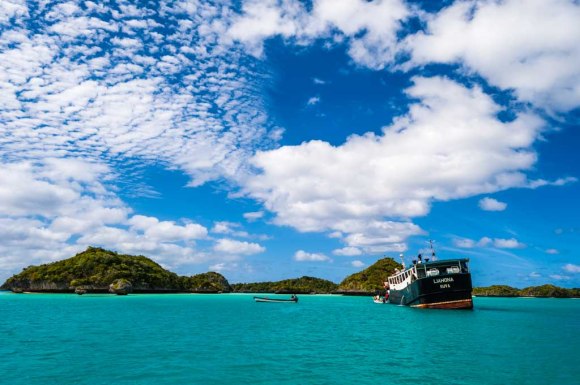 Drums of fuel, pallets of tins, toilet paper and other household items were ferried ashore, and passengers, wood-carvings and other sundry items were ferried back and loaded aboard. (The main cash income for the Fulagans comes from the sale of wood carvings, for which they are renowned throughout Fiji, and from remittances from relatives on the mainland and overseas).

The Liahona is the Fulagans’ only physical link with the outside world, and they are reliant on it bringing everything they need. Orders are placed over the village phone and, weeks later, the stuff turns up: not always as ordered, and not always undamaged.

After the ship’s visit, the shelves in the tiny village store were laden with tinned fish, pink toilet paper, Maggi noodles, corned beef, cocoa, split peas and rice. There wasn’t a fresh vegetable in sight and, with no refrigeration to speak of, no fresh meat or dairy, either.

It took most of the day to unload and reload the ship. Late in the afternoon, we were snorkelling with some other cruisers in the pass when the Liahona came barrelling through, doing about 10 knots and scattering snorkellers and their dinghies. It did a handbrake turn around the reef, listing like a cartoon ship and took off for Suva, four rolly days away.

Knowing how rough the Koro Sea can be, we all shuddered to imagine what that passage would be like. For most of the islanders in this part of Fiji, though, it’s the only option for travelling to the big island.

Thankfully, by that stage, Penina and Seta had secured a ride with Marie and Jean-Pierre aboard Domino, a 65-foot power cat that would cut the journey time in half. They were going to travel in style!