By: Kerry, Photos by Damian and Kerry 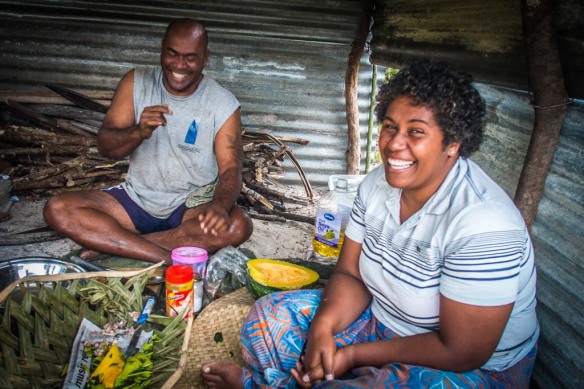 Sikele and Sera preparing yet another feast in their outdoor kitchen

Sera Tuks is Fulaga’s district nurse and only medically qualified resident. As such, she’s solely responsible for the 100-odd souls in Muanaicake, as well as about the same number in Muanaira and Naividamu, the other two villages on the island, plus the population of Ogea, the next-door island. Some 400 people in all.

When the nearest medical aid is a crackling phone line to Suva hospital, or a four-day ship passage (assuming your medical emergency coincides with the monthly visit of the trader), it’s an enormous responsibility, and one she handles with diplomacy, humour and professionalism. (Helicopter evacuation, at huge cost, is a last resort).

When our hosts, Penina and Seta left for Suva, Sera and her husband, Sikele adopted us, and we spent a lot of time sitting around the kava bowl or on the floor of their living room, laughing at Sikele’s wicked humour or sharing a meal. Sikele is a great cook (Sera makes great rotis) and they are incredibly generous hosts.

We had brought around 300 pairs of recycled reading glasses with us from New Zealand (collected by the local Lions Club), to distribute to people who needed them in the more remote villages of Fiji.

The idea was that we’d set up a ‘pop-up clinic’, where anyone needing glasses could come and undergo our rudimentary testing procedure and be issued with a set of specs. All the glasses are labelled with their strength, ranging from +.75 to around +3.5. We don’t have any for long distance, or for more complicated prescriptions.

It’s a pretty simple set up, but nevertheless, we’ve been able to help more than a few people who hadn’t been able to read otherwise, and it’s incredibly gratifying to see the delight on someone’s face when they can read their Bible for the first time in years.

Sera invited us to come along with her on her village rounds and run our glasses clinics in parallel with her medical clinics. 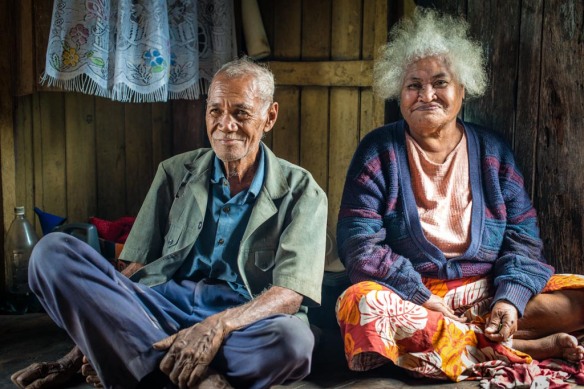 First up, we went to Naividamu, the village at the far end of the lagoon. Sera set up a table in the village hall and a line of mostly elderly villagers soon formed. Hypertension and diabetes are the biggest health issues, she explained, mainly due to poor diet.

While Jean-Pierre, a retired GP, assisted Sera, I sat on the floor with the specs spread around me, and Di, Ana and Marie helped me with the testing and fitting.

Bags of glasses, according to strength 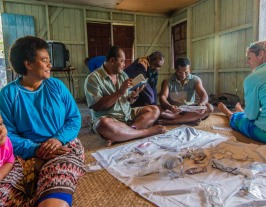 Sounds impressive, heh? Not really! The ‘testing’ involves getting the person to read a page cut from a magazine that has different sizes of print. Depending on what the person can or can’t read, I hazard a guess as to the strength of specs they need. That’s a starting point, then it’s trial and error to determine the perfect strength. After a while, it becomes quite easy.

My first customers were three ladies who were already high on their own giggles when they sat down. The first, who didn’t speak much English, tried a pair of glasses and exclaimed,

“I can see, but I can’t read!” Which inexplicably sent all three into paroxysms.

High on their own giggles 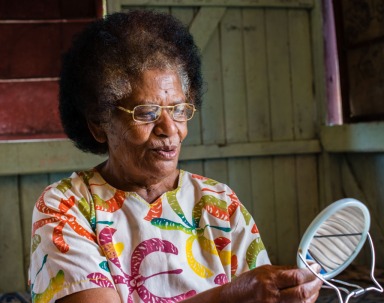 Once I’d confirmed the correct strength, my lovely helpers, Di and Ana spread out the range of matching glasses and our customer got to choose the pair they liked best.

Well, these three ladies got to trying on the glasses and admiring themselves in the mirror, striking poses and taking the mickey out of one another. They were shrieking and rolling on the floor and, well, it was infectious: pretty soon we were all crying with laughter.

We had a steady line-up throughout the morning, so I hadn’t really noticed the kava circle forming at the far end of the room. When I looked up, I was surprised to see the brimstone-breathing preacher from the previous Sunday presiding over the kava bowl, which was fashioned from a cut-in-half mooring ball. I hardly recognised him: he was cracking jokes and laughing and insisted on our sharing a couple of coconut shells of kava.

After the kava, Di, Ana and I went to a house at the far end of the village where a group of women had gathered for another ‘pop-up’ clinic with Ana, who’s a physiotherapist specialising in women’s health. With a little help from Sera as translator, Ana asked if anyone in the room had bladder control issues. There was much tittering amongst the women lying on the floor, and someone picked up a child’s rag doll and hurled it across the room: ‘YES! And we blame it on the babies!’

Everyone howled with laughter, which continued as Ana tried to explain the art of pelvic floor exercises to these dozen women who’d never tried it and for whom English was a second – or third – language. Credit to Ana: they got it.

Over the course of a week or so, we tested everyone in the three villages who wanted a pair of glasses and gave away well over one hundred pairs. I followed Sera around, often doing home visits where we’d get to sit and chat.

She told me of some of the challenges she and her patients face. As part of the government’s Healthy Babies program, women can no longer give birth on the island: at six months, they have to go to the mainland, which means enduring the four-day passage on the rolling rust bucket island trader. Sera is going to study midwifery so that she can deliver babies on the island herself.

Superstition and stigma are also rife. Sera told of one of her patients, a 37-year old mother, who chose to forego a mastectomy and die of breast cancer, rather than bring shame upon herself and her family. And another story about a man who bled profusely from a mysterious wound on his hand, eventually losing his arm. It was deemed that he’d been cursed for cutting down a particular tree that he shouldn’t have.

One of the last people I tested was Chief Taniel. I was mortified when I realised that he had cataracts and that none of the glasses I had would help him. He made a pantomime show of rubbing his eyes and crying. I gabbled profuse apologies. And then he dissolved into giggles.

Me explaining the need for long arms when reading, to Chief Taniel 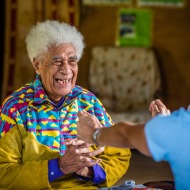 Damian took photos of all our glasses customers and created a fantastic slideshow set to music, some of which was taped at the various Fulaga get-togethers. At the end of our stay, he presented a copy to the Chief and it was screened to the whole village. I can’t upload the ‘show’ per se (too big a file) but here’s some more of the images…