By: Kerry (images from internet) 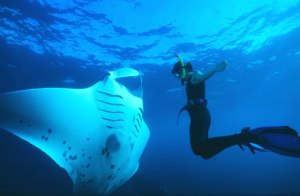 As I slid from the dinghy into the water, a slate grey behemoth rose beneath me and slowly, gracefully disappeared in sinuous undulations into the deep cerulean sea ahead of me. Its movement was so effortless and graceful, it appeared to be flying, rather than swimming.

Between May and early October, a handful of manta rays appears in the shallow pass between Dravaqa and Naviti Islands in the Yasawa Islands and, at high tide and in the right conditions, snorkellers can get up close and personal as they feed on the nutrients that sweep through on the current.

Mantas (known as Vai in Fijian), are the largest of the ray family and their wing span can be up to six metres. One of the biggest fish in the ocean, their only predators are orcas, large sharks… and, increasingly, man.

They have lost their tail stinger and are harmless to humans. They eat around 20 to 30kg of plankton a day, which they filter from the water they take in through their mouths and pass out over their gills.

I finned after the manta as it glided away. She swooped downwards, did a backwards barrel roll, exposing a spotted silvery belly and an array of remoras and other hitchhikers, did a half twist and headed back towards me. She swerved past, only a metre or two away, fixing me with a taxidermist’s bead of an eye.

I was sure she was beckoning me to follow, and so I did. 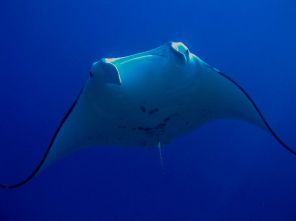 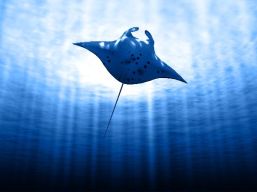 For the next hour or so, with no-one else around, I ‘played’ with the huge ray: I’d fin as hard as I could to keep up, swimming side by side, eye to eye (it’s said that mantas can recognise humans by their irises), the manta’s wing tip barely an arm’s length away.

When I tired or ran out of breath and dropped behind, she would stop and wait, hovering hump-backed and motionless a metre or so below me so that I could appreciate her massive wingspan – twice my own – or perform an elegant barrel roll, allowing me to look into her enormous oval maw, like looking into a jet engine cowling, all the way through to her gills.

With her stalk eye and furling and uncurling mandibles, she looked like a massive, prehistoric insect, but with faultless grace and lithe, fluid speed, she was clearly utterly, perfectly adapted to her ocean environment.

At one point, she appeared to sneeze, shaking loose all the remoras and cleaner wrasse and tiny red and yellow fish free-loading on her belly, and they all had to scramble to catch up. At another, we met up with three other mantas and the four of them glided in formation, flying like enormous birds, their wing tips flashing white, somersaulting and circling in sync.

Davina learned to snorkel in a friend’s pool in England, in preparation for this trip. Nervous, she jumped in and swam with me, holding my hand, as we watched the mantas ‘perform’. I can’t imagine a more amazing introduction to the wonders of the ocean.

The Situation for Manta Rays

When we were in Tonga in 2013, we attended a talk by a photographer/conservationist called Shawn Heinrichs, who spoke about the decimation of the world’s manta ray populations, which have declined so sharply in the past decade that mantas have – in an unprecedented action – been listed in 2014 on CITES Appendix II: ie ‘vulnerable’, and one step below ‘threatened with extinction’.

Mantas are suddenly in favour as – yes, you guessed it – an ingredient in Chinese medicine. The mantas’ gill rakers are reputedly good for ‘cooling the blood’ among other things. However, there is, apparently, no reference in Traditional Chinese Medicine texts to manta gills, and there is no demonstrated evidence of efficacy.

Each animal yields up to 7kg of gill rakers which sell for US$500 per kg.

With shark populations plummeting due to the Chinese fishing for shark fin soup, manta rays are also now sought as a substitute for shark fin.

China accounts for 99% of the world market for manta rays.

It’s known that manta rays are “slow to mature (8-10 years+), are long-lived (40 years+), and reproduce very slowly. A manta ray will give birth to as few as a single pup every two to five years. By comparison, the Great White Shark, a highly vulnerable species protected under Appendix II of CITES, may produce more young in one litter than a manta ray will in her entire lifetime. Further underscoring the vulnerability of manta rays, scientists believe that specific regional populations may be genetically different from other populations.”

Read more of this story here.

And for a bizarrely beautiful look at manta ray magic, check out this short video, made by Shawn Heinrichs, of a ‘mermaid’ and manta rays. (It’s for real, btw – we met Hannah the mermaid on the night. I always wanted to be a mermaid, but who knew you could make a living out of it?).