By: Kerry, photos by Kerry and Pete

We’ve been trying for two years to get to Taveuni, Fiji’s third largest island, to the east of Vanua Levu. So far, we’ve failed.

So once we farewelled the family, we sailed across the country, all the way back east, where we’d come from at the beginning of the season. It took four days, re-tracing the inside channel along the north shore of Viti Levu, then hopping across the Koro Sea, sailing only by day to avoid the reefs.

The plan was to meet our friends, Pete and Gwyn, cruise for a week with them, and then to spend the rest of the season exploring the eastern side of Fiji. It’s totally different to the west (which is in the rain shadow of the big island). It’s incredibly verdant, with thick jungle covering the islands down to the palm-fringed waterline and stunning beaches.

It’s much less ‘developed’ than the west – far fewer and much smaller resorts and more opportunity to hang out with the locals in the villages. And the diving – particularly the soft corals – is some of the best in the world. I’ve been waiting a loooong time to get there!

We met Pete and Gwyn at the airport at the northern tip of the island, and sailed across the Somosomo Strait, NNE to Rabi Island, and dropped anchor in the fabled Albert Cove: we have to agree with all the cruiser hyperbole, it’s one of the more beautiful anchorages you’re likely to find. White sand, crystal clear turquoise water, thick jungle, palm trees and friendly locals – Joseph and Maria – to welcome you ashore.

View over the Somosomo Strait

Catching a batfish off the transom

Sundowners on the tramp 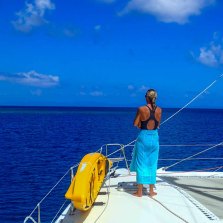 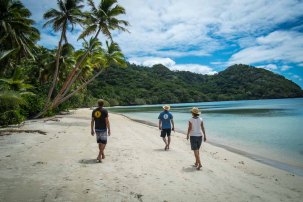 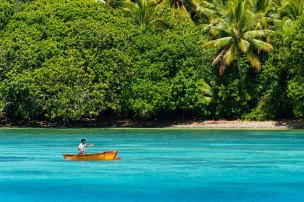 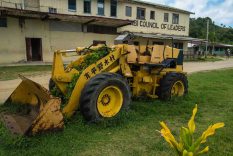 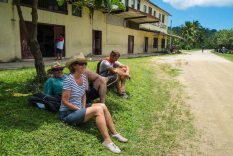 Waiting for the bus, Rabi 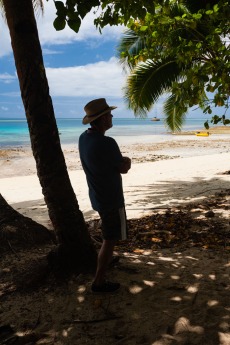 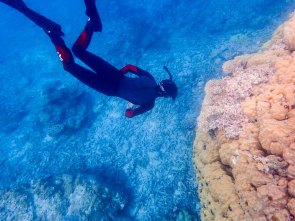 And there we stayed for most of the week, just chillin’, before finally moving across to Qamea Island, to an equally lovely bay – Namata Bay – with more friendly locals.

On the penultimate day, we hired a taxi and drove down the eastern side of Taveuni and took a beautiful coastal walk to a waterfall. 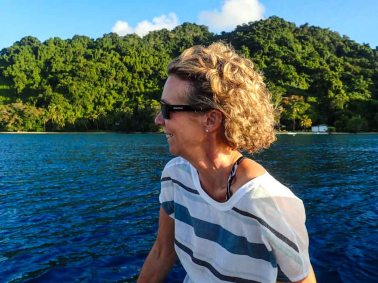 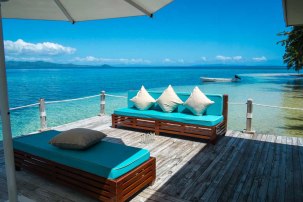 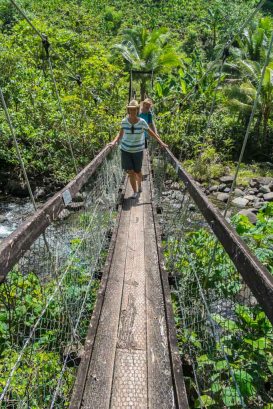 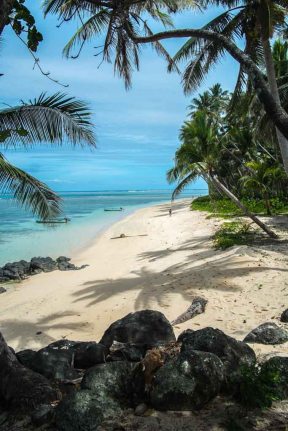 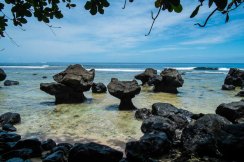 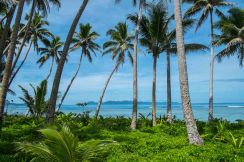 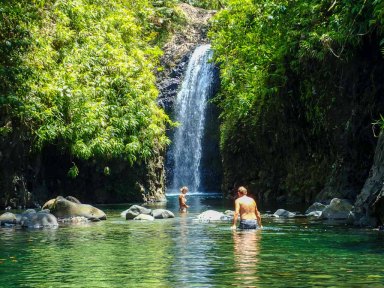 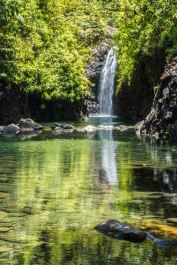 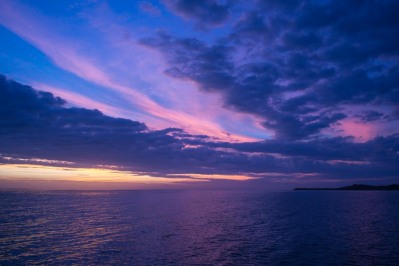 The island is far less developed than the bigger islands of Fiji, but even here, it seems, the environment is being ravaged.

Harry our taxi driver, now in his sixties, used to be a boatman and diver with the local dive operators. He told us how the locals used to get fish ‘just with a line’ on the reef. But not anymore.

We’d seen the infrastructure associated with a new hydro scheme, ‘donated’ by the Chinese. As with other Pacific Island nations, the aid appears to have been offered in exchange for fishing rights.

“All the workers on the scheme are Chinese: there’s only one Fijian.” Harry claimed.

Since the Chinese arrived, the fish stocks have been severely depleted. “Those Chinese, they eat EVERYTHING,” he said.

“All the sea cucumbers are gone, so the reef is dying. Now they go after them with SCUBA – those things don’t stand a chance.

“Why doesn’t the government do something?”

It’s a fair question: we’ve seen the same thing happening in Tonga and throughout Fiji. The sea cucumbers – beche de mer, a Chinese delicacy – are the Hoovers and Dysons of the reef: they keep it clean and healthy. Without them at the base of the food chain, the whole reef system dies.

We had a lovely week with Pete and Gwyn, but on the last night, we received the sad news that Damian’s Dad, Rob had died suddenly in the UK. (He’d been playing badminton at the time, i.e. very fit and healthy, so it was very unexpected).

So we dropped off Pete and Gwyn and sailed back across the country in two days flat, (breaking all the rules about not sailing at night through reefs etc – luckily we had our tracks from the previous trip to follow). We arrived back in Musket Cove, where we could leave the boat safely on a mooring, and Damian jumped on the first plane out.

I stayed to mind the boat…

Damian had only been gone about four hours when all hell broke loose: the battery management system alarm was going off.

In the rush to leave, at 4:30am, Damian had given me very brief instructions on what to do if this happened (meanwhile telling me that of course, it wouldn’t and I had nothing to worry about!). I followed instructions to reset the BMS but it still kept alarming, so I did the only thing I could: I shut the whole thing down.

Unfortunately, something in this process (it’s not clear what) resulted in a power surge through the boat that fried a number of the distributed power circuit boards around the boat. Oops…

So while Damian was in the UK, helping his stepmother make funeral arrangements during the day, and talking to me on Skype at night to try to sort out the battery stuff, I spent the two weeks working long days with electricians and fellow cruisers to try and restore our critical systems. For the first week I was camping: no water, lights, toilets etc. A week later, we’d managed to get things to glamping stage: water, toilets and I could turn the lights on…but not off!

Damian got back a week ago, physically and emotionally exhausted – he had hardly slept since we’d left Taveuni. By then, I had most things rigged so that we could at least get the boat safely back to NZ. Damian finished off the bits and pieces and now we’re pretty much sorted, albeit jury-rigged, with most things by-passing the circuit boards.

For the technically-minded, there is a whole lot more to the story, but suffice to say, we will have to do a major re-work on the electrical system throughout the boat when we get to NZ.

Not sure yet how big a job that will be – if we’re lucky, it might not be huge…Looking like a fun time in NZ coming up! So much for the laid back cruising lifestyle…